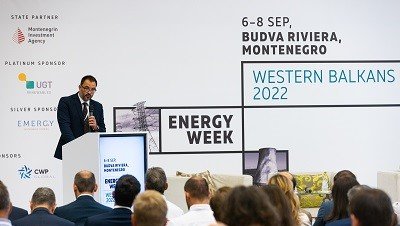 Ahead of the Energy Week Western Balkans 2022, CEENERGYNEWS discussed with the event’s guests and speakers the challenges currently faced by foreign investors and what is still needed to unlock the untapped renewable potential of the region.

The Director of the Montenegrin Investment Agency, Mladen Grgić finds that his country has significant potential for renewable energy sources, such as hydro, wind, solar and biomass. Thus, he says, our priority as a country is the production of renewables and this is precisely the opportunity for potential investors.

“In addition to the environmental benefits, increased investment in renewable energy sources would have a positive impact on helping the country diversify its economy, which currently relies heavily on tourism,” he tells CEENERGYNEWS. “It is important to point out that Montenegro plans to increase the share of renewable sources in its energy mix through auctions for renewable energy sources, which will attract private investments in this sector.”

Furthermore, he notes that due to the good position of the energy system itself on the corridor to Greece and Italy, together with the huge unused energy potential and the existing submarine energy cable with Italy, Montenegro has the possibility of placing surplus electricity to different markets in different periods of the year depending on the needs of the systems themselves, which represents the biggest advantage for our country when it comes to energy.

Also, North Macedonia has ambitious goals included in its Strategy for Energy Development until 2040: an additional 1,500 MW of PV capacity to be installed, 750 MW in wind farms, around 800 MW in big hydropower plants and 450 MW in gas-fired plants. All of this can turn into potential foreign investments.

“Having in consideration the amount of the investments that are needed to achieve the targets in the Strategy for energy development until 2040 and possibilities and capacity of the domestic economy, it is obvious that private investments will be essential to achieve our targets and goals to develop sustainable energy sector,” highlights Viktor Andonov, Energy Adviser to the Prime Minister of North Macedonia.

Scandinavian renewable developer Emergy, which is already present in the region with the 168 MW Alibunar wind farm in Serbia and around 2 gigawatts (GW) of projects in the pipeline, shares its experience on the ground. As pointed out by Magnus Johansen, Executive Vice President of Offtake, the main challenges lie in having an aligned national strategy and a good dialogue between the private sector and national and regional public stakeholders.

He compares the country to a car, the local government and public stakeholders are the drivers, international advisors act as the navigator and the private sector is the engine.

“The speed of moving the car from point A to point B (known as decarbonisation) depends on what fuel the owner put into the engine,” he says. “We hope to help pull several of these Southeast European cars forward and this can now mostly be done without subsidies given the current market conditions.”

Also, the head of the Montenegrin Investment Agency agrees that additional harmonisation of laws and overall legal legislation with European ones is needed, as well as the need for total liberalisation of the electricity market, which would make the interest of foreign companies – suppliers incomparably greater.

“Also, for years, Montenegro has not adopted the law on value-added tax (VAT) on the wholesale electricity market, which significantly reduces the interest of foreign companies, that is, represents a greater risk for business within the borders of Montenegro for all companies,” adds Mr Grgić.

In North Macedonia, for Mr Andonov, the main challenge lies in simplifying the procedures for the construction of renewable energy projects.

“From a technical point of view, integration of the renewable energy projects in the transmission and distribution system will be the biggest challenge in North Macedonia and the region,” he continues. “We don’t have experience in the region with the integration of big renewable energy projects in our systems and I believe that we need to pay more attention and be focused on this issue. There is an experience in Europe on how this issue can be solved smoothly and of course in the interest of all stakeholders. Complementary to this issue is also the introduction of the battery storage systems that will be essential for the stability of the grids and I believe that we need to introduce the necessary legislation and technical requirements on time to simplify the integration of renewable energy projects in our systems.”

Photo by Invest In Network