Serbia could develop 100 MW of hydrogen capacity by 2030 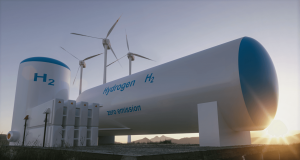 The first phase of Serbia’s hydrogen transition, until 2025, should see the development of 10 MW of electrolysis plants using renewable energy, while the target in the second phase, until 2030, is 100 MW of capacity and an output of 50,000 tons of hydrogen. By 2050, annual production could reach 2.5 million tons of hydrogen to be used in transportation (28%) and industry (24%), as support to microgrid and nanogrid electricity systems (22%), and in households (16%), according to authors of an outline of Serbia’s hydrogen strategy.

The outline of Serbia’s hydrogen strategy is a pioneering undertaking given that there is no serious country in the world which is not considering ways to catch up with the development of hydrogen technologies, whereas in Serbia this is not even a topic in the public and private sector or the scientific community. The document was drafted by a working group comprising representatives of the Faculty of Mechanical Engineering, Institute Mihajlo Pupin, business association Elektromašinogradnja, which gathers 13 Serbian companies, as well as several experts. Its aim is to stress the need for an integrated approach in steering the ongoing and future development of Serbia’s energy sector towards the use of hydrogen.

Hydrogen can be used as raw material and fuel, and for energy transmission and storage

Although technologies for the production and application of hydrogen have been available for decades, they have only recently been recognized by the private sector, but also states around the world (the EU’s hydrogen strategy for a climate-neutral Europe was adopted in July 2020), as a solution to facilitate an efficient and speedy energy transition. Green hydrogen, produced by the electrolysis of water with electricity generated from renewable sources, can replace fossil fuels in industry and transportation – sectors where no adequate alternatives have been found yet. However, the application of hydrogen could be much wider since it can be used as raw material and fuel, as well as for energy transmission and storage.

The next step for the working group is to include representatives of the ministry and investors in the preparation of the strategy, in order to follow the model applied by all countries around the world, where the state, the industry, and investors work together on drafting documents of this kind.

The outline of the strategy aims to point to the need for Serbia to catch up with the hydrogen transition in Europe by 2023, by allocating the necessary resources, but also mobilizing the available human and organizational capacities.

In the first phase of the hydrogen transition, until 2025, the goal is to install 10 MW of electrolyzer capacities for the production of hydrogen using renewable energy. In that period, national regulations and standards should be rounded off and harmonized with international practice.

In the second phase of the strategy’s implementation, until 2030, the goal is to install 100 MW of capacities and reach an output of 50,000 tons of green hydrogen.

With hydrogen technologies expected to reach market maturity after 2030, it is a realistic option for Serbia to be actively involved in hydrogen gas pipeline systems, but also to have its own distribution network. In the same period, it is also realistic to expect the development of hydrogen infrastructure, including 20 hydrogen filling stations along the main highways, in air traffic, and in river transportation, according to the outline.

By 2050, Serbia’s annual hydrogen output should reach about 2.5 million tons, of which 25% from renewable energy sources, 35% from biomass, 40% from coal (based on hydrogen production from genetically modified organisms), and 10% based on new technologies for the production of hydrogen from waste.

Miljan Vuksanović, vice president of WES CO Power and Engineering, has told Balkan Green Energy News that the adoption of a hydrogen strategy is inevitable, just as it is inevitable for hydrogen to become a key fuel of the future. He says that the hydrogen transition calls for mobilizing nearly all national resources, as well as engaging the industry, investors, and the entire education system.

The strategy will comprise some 50 projects to enable controllability

This is precisely the key shift proposed by this initial outline of the strategy, which should serve as a basis for developing a final strategy in conjunction with the state administration, investors, and other institutional entities.

Another important innovation in this approach is the model of the strategy, which will be made up of some 50 key projects shaped into 30 activities that can be individually controlled and monitored. In this way, the strategy and its implementation will become a “master project,” a term used in project management, in what will ensure the controllability of its implementation.

The outline envisages the involvement of the Diaspora

The outline also envisages the involvement of the Diaspora given that a considerable number of Serbian scientists are already working on the development of hydrogen technologies.

The document should enable Serbia to catch up with contemporary trends in the hydrogen transition despite the fact that the country is lagging far behind, which could lead to serious consequences, according to Vuksanović.

Milenko Nikolić, general manager of Institut Mihajlo Pupin – Automatika (IMP Automation & Control Systems Ltd.) and executive board chairman at Elektromašinogradnja association, has told Balkan Green Energy News that everything was initiated by Miljan Vuksanović, who proposed to the association to do something to help Serbia catch up with the hydrogen sector development.

Any effort would be pointless without the education of experts

According to Nikolić, the state should take a position on this issue and find resources to invest in several areas – first and foremost in education, because any effort would be pointless without the education of experts. It is also necessary to invest in projects that would mobilize institutes and people who are already working on hydrogen technologies, in order to help Serbia prepare for the arrival of hydrogen, he says.

If these efforts fail, Serbia will be just a country that buys hydrogen technologies, which is something developed countries are counting on. Gathering around this outline of the strategy is all about helping Serbia prepare for a wider application of hydrogen, he says.

Serbia must invest more in the education of engineers

Radivoje Mitrović, dean of the Faculty of Mechanical Engineering, says that the Elektromašinogradnja association has launched an initiative to include hydrogen in Serbia’s strategic energy sector documents. This should be done in cooperation with faculties, the Serbian Chamber of Commerce, and the Academy of Engineering Sciences of Serbia.

The Faculty of Mechanical Engineering, as an institution that deals with all kinds of fuels, including hydrogen, would like to see more research in this area and, more importantly, much more investment, in the first phase, in the education of engineers for a generation of products that will be based on hydrogen as fuel, according to Mitrović.