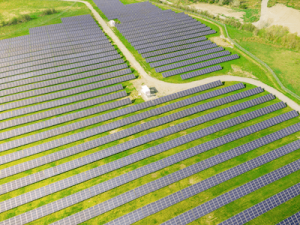 The state-owned electricity utility company Elektrani na Severna Makedonija (ESM) announced that their 10 MW Oslomej 1 solar power plant is officially operational. It was constructed at the former lignite mine site of the Oslomej coal complex. The latter was previously used by the thermal power plant in the municipality of Kičevo.

The state-owned electricity utility company ESM owns both the coal complex and the newly built solar power plant. This is a part of the company’s strategy to phase out its coal-fired power plants and replace them with gas or renewables. The company also has an operational wind power plant Bogdanci in its’ portfolio with further investments planned toward its’ expansion.

It should be noted that the ESM does not intend to stop renewables developments at the Oslomej as it already has three more solar PV plants in the pipeline for this site.

The Prime Minister of North Macedonia, Dimitar Kovačevski, participated in the inauguration ceremony of the Oslomej 1 solar power plant. He stated that it is the government’s priority to work alongside their partners to transition the country’s energy sector from being fossil fuels dominated to the one that operates mainly using solar, wind, hydroelectric and gas power plants. He also noted that the Oslomej 1 power plant has an estimated annual generation from 15GWh up to 17 GWh which equals the electricity consumption of as many as 2,800 households.

According to the Prime Minister, ESM is currently working on a second 10 MW solar power plant at Oslomej with two more projects whose capacity is yet to be determined. Once all of the solar projects are finished, the Oslomej complex will be fully switched from coal to renewable energy production.