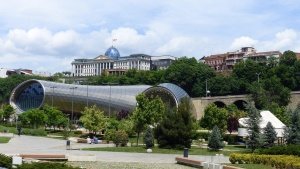 Investing in renewable energy sources (RES) in the Black Sea region is gaining momentum. Although they may differ in terms of politics and economic background, the countries surrounding the Black Sea have all the same goal: increase the share of RES. Cooperation and interconnectivity become keys in reaching this target.

“The shift for renewables is possible, cost-effective and can attract major investments,” said Aida Sitdikova, Director of Energy Eurasia at the European Bank for Reconstruction and Development (EBRD) during the Black Sea Energy Week that took place online on 29-30 September.

However, Mrs Sitdikova herself recognised that the energy transition goes beyond renewables and relies more on approaches and a shift of mentality.

High expectations for the next decade

The International Renewable Energy Agency (IRENA) estimates that by 2030, there will be 620 gigawatts (GW) of solar and wind power installed capacity in Southeastern Europe. A huge number if we think that today the same energy sources account for 103.4 GW of the capacity installed.

Romania sets its climate target for 2040 to raise the share of RES to 40.7 per cent, reaching 6.9 GW on installed capacity. And this year, Ukraine registered a more than 200 per cent increase compared to 2018.

“We managed to exceed our obligations supporting he execution of the EU energy directive,” said Dmytro Kovalenko, Commissioner at the National Energy and Utilities Regulatory Commission. “We were expected to achieve 11 per cent share of RES in the total energy balance, we had more than 12 per cent. By 2030 we would expect to achieve more than 13 per cent and 25 per cent by 2045.”

Gurbuz Gonul, Director, Country Engagement and Partnerships at IRENA, reminded that such growth is mainly due to a decrease in prices. RES generation costs have fallen sharply in the last decade, to be less than the cheapest new coal options.

“Carbon emerged as the biggest loser of the pandemic while RES have become more important than ever,” agreed Mrs Sitdikova.

Investing in RES doesn’t come without risks. During the Black Sea Energy Week, it has been underlined many times the volatility aspect of RES. There are dry seasons and wet seasons, sunny days and cloudy ones. And some of the countries (like Georgia) do not have enough state support to counterbalance these uncertainties.

“In Georgia, there is an opportunity to start projects in the solar and wind field (not mentioning hydro which already accounts for 80 per cent of the electricity production) and 2021 will be a crucial year,” explained Maia Melikidze, Commissioner at the Georgian National Energy and Water Supply Regulatory Commission (GNERC). “There are supporting schemes but they are not enough. We need to have more projects regarding energy efficiency and the already existing schemes need practical testing.”

Many new tools are emerging on the scene. Andrew Petry, Partner at the international law firm Simmons & Simmons mentioned international auctions which are making the headlines today in many of the countries in the region.

“Technologies are getting cheaper and cheaper,” he said. “Not many years ago, people would have never believed that wind could have replaced fossil fuels and look at the reality today. However, international auctions must be sophisticated and they must run regularly otherwise we investors could end up with something that cannot be delivered.”

Georgia and Turkey are already using this tool. Georgia, in particular, would like to act more as a transit country.

The importance of interconnection

“Interconnection is critical for renewables giving the intermittence of the sources,” highlighted Mrs Sitdikova. “It is also a great way to support cooperation among countries and has an important place to occupy in the future energy transition.”

Giorgi Chikovani, CEO of the Georgian Energy Development Fund said that the main goal of the country is to diversify its energy sources and tap others like wind, solar, biomass and hydrogen.

“Georgia’s priority would also be to strengthen its role as a transit country from East to West and from North to South and strengthen the energy security not only nationally but of the entire region,” he said. “There is a strong connection with neighbouring countries but more should be done with Armenia to have more capacity to trade. Anyway, despite the challenges that came with the COVID-19, Georgia hasn’t stopped to improve its energy sector and we are looking at the future very optimistic.”

For Mrs Melikidze interconnection is a synonym of energy security for Georgia and the region. “Strengthening cooperation will bring us the expertise in exchange,” she pointed out. “Everybody needs the energy sector to develop because it is the spine of the economy.”

More interconnection capacity translates into more renewables energy sources, which in turn mean cheaper prices for both the investors and the consumers. A win-win solution to be fully exploited if we want to succeed in the energy transition.