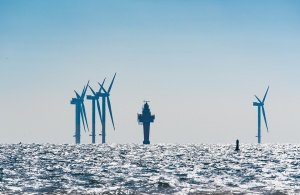 As the European Commission is set to publish its offshore wind strategy later this year, the recently released study of Centre for European Policy Studies (CEPS) states that Black Sea’s offshore wind is a major economic opportunity for EU and non-EU countries in the region to unlock large volumes of low-carbon electricity and deliver on the commitments of the European Green Deal.

In light of the objective of achieving a climate-neutral European Union by 2050 increasing offshore wind energy production will be essential. So far, almost all focus has been on the offshore potential of the North Sea, slowly stakeholders are discovering the potential of the Baltic Sea, Southern European waters and the Black Sea.

World Bank estimated in its recent study that the technical offshore wind potential for Bulgaria and Romania alone to be more than 100 GW, which amounts only to a fraction of that of the North Sea, however, it equals about five times Romania’s installed electricity generation capacity, while in Ukraine it is two and half times that of Bulgaria and Romania combined.

Additionally, offshore wind can be a viable option to substitute increasingly uneconomic coal, without increasing dependence on imported Russian gas, including for landlocked countries such as Hungary, Serbia, Moldova and Northern Macedonia, or neighbouring Greece.

A precondition would be the adequate development of the regional transmission grid. Studies also indicate that the development of offshore wind in Southern regions will make a significant contribution to the stability and flexibility of the EU grid as a whole.

The concept though is not completely new in the region. Romania currently has the largest onshore wind farm in the EU. The country’s Hidroelectrica has announced a plan for a 300 MW offshore wind farm for the first time. Both Bulgaria and Romania were among the first countries to achieve the national renewable energy target while Greece is forging ahead with phasing out coal and expanding renewables.

The CEPS study admits that to date not all offshore wind investments are economical especially for floating offshore wind. However, costs are falling rapidly and, in many cases, fixed offshore installations no longer require subsidies. Load factors of 50 per cent or even more, i.e. the time the installation produces electricity, are an important element in this. Other renewable technologies have load factors that are about half that amount.

Coordination among stakeholders is essential, but the governing framework already exists under the Central and South-Eastern Europe energy connectivity (CESEC) process. In its recently published report IRENA estimated that by 2030, the economies of the region could cover 34 per cent of their rising energy demand cost-effectively with renewables, which includes a huge potential for wind energy. According to CEPS it would be relatively easy to incorporate a special ‘offshore wind’ framework, e.g. a working group into the CESEC process.

A successful EU Black Sea strategy may also radiate beyond the EU and the Energy Community as there is interest in renewable energy and offshore wind, especially in Turkey, but also in Azerbaijan, Russia and the Caspian region.

Today, the local energy demand in the countries of the region is forecast to grow in line with the GDP. Turkey, for instance, has an untapped offshore wind potential of 11 GW. Güray Erol, Secretary-General of the Turkish Wind Association (TWEA-TÜREB), the oldest renewable energy association in Turkey told CEENERGYNEWS that the growing demand will absolutely help to design a scenario to shift to 100 per cent renewable energy. He underlined that Turkey has a remarkable potential for offshore wind and together with the improvement of technology and amelioration of the economic aspects, the country could be on a competitive edge.

CEPS notes that although to date the geopolitics are difficult, many institutional cooperation frameworks already exist or could be revived, perhaps with a new focus.
As prices continue to drop, offshore wind is increasingly gaining traction and the potential benefits are tremendous not only on a regional but also on an EU level. It could attract new investments in with a simultaneous phase-out of coal, create jobs, enhance energy security and it is also suitable for the production of green hydrogen, which quickly became one of the most important buzzwords of the EU energy agenda in the past year.

Money shouldn’t be a concern according to CEPS as the Next Generation EU recovery fund provides proper incentive. More likely, a lack of sound plans and projects will be the hold-up. For this reason, the study highlights that the European Commission and those member states with capacity may need to assist countries in the region that are looking to develop their plans.