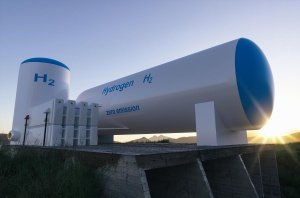 LONDON (ICIS)–Bulgaria is planning to develop a hydrogen roadmap targeting 1.1GW of green hydrogen production capacity by 2030, according to a report presented by Angel Popov, deputy transport minister during European Hydrogen week.

The country plans to produce hydrogen by electrolysis using renewable sources and sets a goal of installing additional 800MW wind and 280MW solar capacity by 2030, according to the report.

This goal is separate to the National Energy and Climate Plan (NECP) which targets 2.1GW solar, 250MW wind and 250MW biomass capacity by 2030.

The Bulgarian government is working to develop a comprehensive hydrogen roadmap in the next three months that would tackle the decarbonisation challenges across all sectors, added Popov during online webinar discussions on 27- 29 November.

The Bulgarian roadmap will fall in line with the hydrogen strategy unveiled by the European Commission in July. The strategy aims to have 6GW of renewable hydrogen electrolysers installed in the EU by 2024 and 40GW by 2030.

The opportunities for hydrogen use in Bulgaria are set to lie primarily in some industrial sectors and in the transport sector, according to the report.

The industrial sector already uses hydrogen mainly as feedstock in ammonia production, for the refining of fuels and for the production of iron, steel, glass or electronics.

Furthermore, gas currently accounts for around 34% of the final energy mix, so hydrogen could contribute to the decarbonisation of this stream of energy demand from industrial plants, said the report.

“Bulgaria could assess the possibility to start injecting limited hydrogen volumes into its gas transport and distribution infrastructure,” said Popov.

In the transport sector, Bulgaria is set to take part in the 2GW Blue Danube project with an estimate €5.8bn budget. The project includes eight countries and seeks to produce green hydrogen in southeast Europe using off-grid wind and solar energy and transport hydrogen via the Danube river to users in countries of the Danube region.

Bulgaria has a strong opportunity for hydrogen use in road transport. “The country’s rail sector is still dependent on fossil fuels for one third of its energy use. Hydrogen is one of the solutions to decarbonise this sector by replacing the existing diesel trains,” said Popov.

According to the NECP, Bulgaria intends to enable the integration of hydrogen in its energy and mobility systems. It expects to consume 32GWh hydrogen annually in the transport sector by 2030 which will be facilitated by the planned deployment of hydrogen refuelling stations.

A hydrogen refuelling station has already been designed in Sofia and is set to be operational by the end of the year, professor Tzvety Tzvetkov, head of Bulgarian Hyrdogen Society, told ICIS.

A €3.45m pilot project for a hydrogen plant with total installed capacity of 20MW is set to be among the first to be developed by 2030, according to the NECP.

The European Investment Bank (EIB) is also playing a key role in supporting emerging technologies like hydrogen, including projects designed to convert renewable power into other energy carriers, Andreas Beikos, head of office at EIB Group for Bulgaria told ICIS in a recent interview.

The bank organised an Energy Finance Workshop in Bulgaria in November with the ministry of energy to discuss the specific needs of the country including energy efficiency, renewables, innovation.

“We are working together with the Bulgarian authorities under their NECP to identify their infrastructure and financial needs, including developing a pipeline of eligible projects,” said Beikos.